In a (Virtual) Caribbean 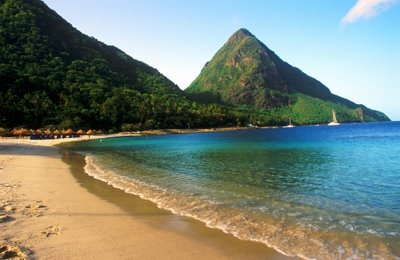 So, after a couple of weeks in England, I have moved on to Japan. Do not be confused by the above image however, which is not the concrete of downtown Osaka, but rather a beach in St. Lucia in the Caribbean, and the significance of which I will explain in a moment.

But first, Japan. Oh, my poor dear house in Japan - since last year I have only spent five weeks in it. But there it is, all pristine and perfect and waiting for the master's return. The great camphor tree in front of it is a blaze of greenery and I hope over the coming weeks I will take inspiration from it and keep pushing the pen and get some of my current projects finished. It is of course quite, quite wonderful to be back.

I have to say that when I returned to England from Argentina, things ground to a halt on the Cortazar front. I want to keep going with Hopscotch however if only to complete the Cortazar Dictionary I have been compiling. Here's a few of the words I've had to look up:

Is it just me or are some of these a tad obscure? I'm afraid Cortazar has dropped onto my reserve list of great writers and if his form doesn't improve soon, he can expect to be transferred.

Bored with Julio, I made a mental leap to the Caribbean and have been scouting out Derek Walcott as a possible replacement and have been reading Omeros, set on the island of St. Lucia. Now Omeros does have its moments, but it's not exactly an easy read either - in fact I've only got a vague idea of what Derek is talking about most of the time.

In 1993, a year after Derek Walcott won the Nobel Prize for Literature, I spotted an advert for some evening classes in his poetry offered at a university. When I showed up for the first class however, I was told the course had been cancelled. It turned out that I was the only person who had signed up for it. Ah, there's nothing like a Nobel prize to galvanize mass public interest... 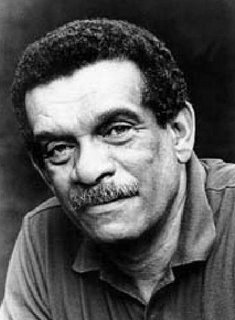 So it's really been a long time coming for me to get round to reading Derek Walcott's poetry. What I most enjoy about it is the evocation of the Caribbean island of St. Lucia, its history, people and patois. I've never been to the Caribbean and until opening Omeros, had no idea where St. Lucia was. So as an introduction to another part of the globe previously unknown to me, it's been excellent.

It's just a shame that the poetry itself is so hard going. Does poetry have to be like this? I keep reminding myself that the first time I read Seamus Heaney's poetry I also found it fairly impenetrable. But eventually I developed a great fondness for his work - in fact for many years I used to say that he was the only living writer in the English language I truly admired. (These days the numbers have doubled, but I'll talk about the other one another time).

When I was trying to promote my book about Soseki in London, I wrote to Seamus Heaney and attempted to persuade him to write something on Soseki. I put in some predictable blurb about how much I admired his work and how wonderful it would be if he could write something about Japan's greatest author. I think I was particularly angling for him to write something about Soseki and his Irish tutor William Craig (though as Craig was an Ulster protestant and Heaney is Catholic and nationalist, he was probably not the most enticing subject for Heaney's sympathies).

At the time, I wrote to various people I wanted to get interested in the subject and predictably several of them - Clive James, Roy Hattersley and a slew of miserable newspaper literary editors - never even bothered writing back. But from Heaney arrived a charming letter of thanks for the book I had sent him.

Later on, when we had the book launch for The Tower of London, I asked Peter Owen to send Heaney an invitation. Yet again, a card arrived wishing me the best, but explaining that he would be in St. Lucia that week. 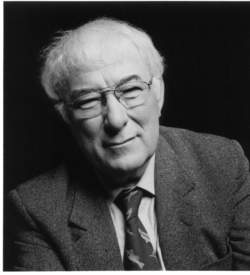 Heaney must get inundated with these types of letters and invitations and so I appreciated his gracefulness. I did wonder however whether Heaney used the 'Sorry, but I'll be in St. Lucia next week' line as a sort of standard excuse in the way you or I might say, 'Sorry, but I'm watching Coronation Street that evening'. Then however I discovered a quote by Heaney on the inside jacket of Walcott's Omeros and realised that the poetry trail (a friendship with Walcott perhaps?) might explain the St. Lucia connection.

Incidentally, I also invited Seamus Heaney to the award ceremony for the Tower of London book at Columbia University in New York last year and heard at the dinner afterwards that he had yet again written in offering his apologies. At this point I began to fear that I was engaged in a kind of epistolary stalking of my hero and resolved that from now on I should probably content myself with admiring him from afar.

Anyway, for all you Soseki fans out there, a couple of pieces of news. I am informed by Kodansha that my new book (in Japanese) on Soseki is due out this autumn. I wrote this book in English and am already feeling indebted to the translator who has put such great efforts into it.

And if any of you would like to come and see me in the flesh - live and uncensored (to adopt Roy Chubby Brown parlance) - I will be doing a couple of gigs in the next couple of months. On June 16th I will be giving a talk in Nishinomiya, Japan, at a special event co-organized by Japan SWET and Kobe College. For details about this, please look at the events page.

And for those of you who can't make it to Japan, a similar event will be taking place in England in July, though the date has yet to be finalized. I'll keep you posted.
Posted by Damian Flanagan at 11:38 1 comment: 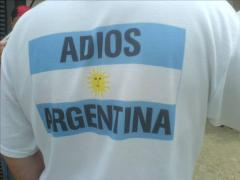 All good things must come to an end and so, with heavy heart, I must bade farewell to glorious Argentina. Adios y gracias.

But first, a few more adventures.

One thing I hadn't quite prepared for on the long drive back across the pampa was the flies. At first it was just a few flecks splattered on the windscreen. When I pulled into a petrol station 300km into the journey, a gawky kid hanging around with a dog asked me if I wanted the windscreen cleaned.

About 100km further on, I was having trouble seeing through the window. It was completely covered in splats. First I used up all my windscreen wash, then I had to stop the car and manually wipe off the sludge using my drinking water and tissues. As it got darker and my headlights went on, I found I was driving through a ferocious storm of greenfly, hitting the car like hail. Unable to see and groping my way in the dark and the glare of the headlights of oncoming lorries, I had to abandon driving and pull into a garage. The petrol station had vast swarms of flies swirling everywhere - more flies than I have ever seen. The front of my car had turned green with squashed fly sludge - it looked like a lawnmower that had spent a hard day cutting grass.

In order to avoid the traffic chaos of Buenos Aires, my plan was to spend the last night in Lujan, the pilgrimage centre dedicated to the cult of the Virgin. It was however a depressing place, full of the usual mix of kitsch tittle-tattle and insufferable religious piety that you can find in Fatima, Lourdes and Knock. A couple of hours there was more than enough so I opted to throw caution to the wind (the Virgin of Lujan is after all the matron saint of safe journeys) and brave Buenos Aires for one last night. With a couple of aperitifs in San Telmo and supper in Las Canitas, it was the only way to properly see out my Argentine travels.

Here's a quick list of things to love and loathe about Argentina.

The People - marvellous, charming, unaffected people. It's going to be very hard to support England in any future England-Argentina internationals.

The Wine - Malbec of course, but Cabsavs and Pinot Noirs are glorious too.

The Love of Literature - puts the British to shame.

Oh, and the huge expanses, the tango, and yes, even Dulce de Leche.

And a few things on which the jury is still out:

Julio Cortazar (300 pages in and he's not exactly floating my boat, but obviously someone thinks he's great)

There's a wonderful English language bookshop in San Telmo called Walrus Books, a charming place with great books and mellow melodies. On my final morning I considered buying two hefty tomes, The Golden Bough and An Argentine Reader. I keep promising myself that I will keep my bibliomania in check and my suitcase already groaned under the weight of books. So I left the shop and paced around San Telmo, mulling my purchase.

I had recently bought in England The Cairo Trilogy and Lloyd George's enormous war memoirs in two volumes, plus a slew of other titles, and when was I going to get time to read them exactly? An inner voice answered that I had once bought in Winnipeg a 800-page History of Ukraine and hadn't I read it when I was bedridden for a few weeks? I found a part of myself secretly looking forward as a consolation to future illness that I will have time to read some of the books I keep buying.

So the conclusion was inevitable. I went back and bought the books. Oh well, at least I'll be able to inscribe my second-hand copy of The Golden Bough with the magical words 'Bought in Buenos Aires' inside.
Posted by Damian Flanagan at 18:56 No comments: