The March of the Penguin 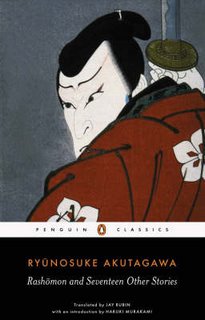 I'm currently enjoying a short interlude after sending off the final proof of the new book - which now looks as if it will be out next month. I've a variety of things to talk about, but before I turn to more important matters of international significance, a little comment on my own small pond of Japanese literature.

Penguin recently added the famous Taisho period short story writer Akutagawa Ryunosuke (1892-1927, pictured right) to their Classics series by publishing a book called Rashomon and Seventeen other Stories. Jay Rubin, former Harvard professor of Japanese and noted translator of the novels of Murakami Haruki and Natsume Soseki, read all Akutagawa's stories and picked out the ones he thought the best and which would be of greatest interest to the western reader. Then Murakami Haruki - Japan's renowned international best-selling author - was asked to provide an introduction.

So far, so good. In his preface to the book Jay Rubin notes his thanks to the 'dream team' of people who provided assistance with his translation labours and to Murakami for writing an introduction. The rationale for a Japanese edition of this book is that it provides a fascinating insight into which of Akutagawa's stories have the most international currency and also that the Japanese reader is likely to be interested in Murakami's introduction.

However reading Jay Rubin's preface to the Japanese edition, there is a curious account of how the collection came about in the first place. The former editor of Penguin Classics in London, we are told, 'by chance happened to come across an old translation of Akutagawa's stories and and immediately perceived the power of the works'. The editor had read Jay Rubin's translations of Murakami's novels, so he sent Jay Rubin a letter asking whether he might be interested in providing a new translation of Akutagawa's stories and whether they might be accompanied by an introduction from Murakami. The editor realised that a lot of time had passed since Akutagawa's death and that his works should be published as a 'classic', but he apparently wrote a letter full of passion for Akutagwawa's works, as if he had discovered a new talent who had suddenly emerged in the literary world.

Hmmm...It all sounds like a heart-warming story of the power of literature to move people across ages and cultures. Yet my interpretation of events is a little different.

Penguin purports to hold itself up to lofty standards, but actually it is not strictly literary criteria which determines what goes into Penguin Classics. For example, Penguin have for many years ignored the greatest modern writers of China and Japan because they have assessed that their works won't sell in the West. On the other hand, they have inserted into the 'classics' relatively minor works provided that they think they can turn a profit on them on the back of a 'celebrity tie-in'. Too often it seems that it is economics and publicity that determines what is included, rather than the series being representative of the best of world literature.

Let me tell you a little bit about my own experience. In 2000 I happened to write to Penguin suggesting that it was bizarre that the novels of Japan's most famous literary figure, Natsume Soseki, were not included in Penguin Classics. Nor indeed were the works of Lu Xun, China's greatest modern literary figure. I suggested that Soseki's novels be re-released with new introductions and said that this was particularly appropriate given that 2000 marked the centennial anniversary of Soseki's arrival in Britain and that the following year would see a year-long Japan festival in Britain. Why didn't Penguin take the opportunity of the anniversary and the festival to introduce Soseki's works to the British public?

The editor showed some interest and in a brief letter asked me where Penguin could get hold of the old translations of Soseki's novels. Then there was a long pause while they looked at the novels and then another brief letter was sent out declaring that Penguin would have to leave it for the moment as the schedule was currently 'too full'.

Shortly afterwards the same editor wrote the letter to Jay Rubin about Akutagawa. Jay says that it was because the editor happened 'by chance' to read the old translation of Akutagawa's works and that he 'immediately perceived the power of the works'. Well, call me a cynical old devil, but I rather suspect that it was actually because there was a famous film by Kurosawa called Rashomon which had won the Grand Prize at the Venice Film Festival and Penguin wanted to insert into the 'classics' a Japanese author who already had some currency in the West.

Now don't get me wrong. It's great that Akutagawa is in Penguin Classics - but it's surely strange that he should have got the nod before many other much more important Japanese and Chinese writers. I'm sure that Jay Rubin will have done excellent translations and that Murakami's name on the cover will help to get Akutagawa's works read by people who perhaps otherwise would never come into contact with them. (Though personally I don't think much of Murakami's abilities as a critic, but that's another matter). However my chief complaint is about the way a methodical commercialism is dressed up as 'passion for literature'.

Jay Rubin was busy on some other books so the Akutagawa book did not emerge until 2006. In the meantime, I wrote to Penguin again in 2003 about Soseki. By this time I had the manuscript of The Tower of London finished and I again suggested that Soseki should be in their classics series and so would they like to publish it? Again a few months of scrutiny ensued before the conclusion was reached that although there was no doubt about the quality of Soseki's works, the answer was still no. Since Soseki had no 'serious profile' in the West and because it was so long since he had died, it was 'too difficult' to now introduce him to the West. On this occasion it seems that 'perceiving the power of the works' was not enough. 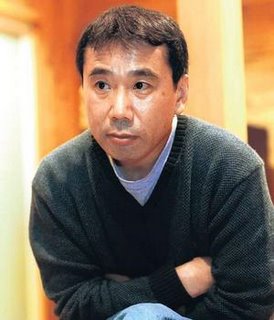 I had to raise a smile however when I read Murakami's introduction to the collection of Akutagawa stories. Murakami (pictured right) lists the most popular 'national authors' of modern Japan and notes that there is no question that top of the list is Natsume Soseki. Furthermore he writes that his own personal preference - and this remember is in an introduction to a collection of Akutagawa's stories - is not for Akutagawa, but for Soseki and Tanizaki, with Akutagawa a distant third.

Lo and behold, Penguin suddenly changed their minds. Soseki would be put into their classics after all! From the whisperings that have reached my ears, a variety of new translations of Soseki novels are currently being prepared and are likely to emerge in the next few years.

Good to know then that the whole ethos of Penguin, nurtured from its first publication of E.V.Rieu's translation of The Odyssey, to open the eyes of readers around the world to the riches of literature has in no way been compromised by calculations of 'What's famous already? What will sell the best? Is there a film tie-in? Is there any celebrity who can write the introduction...?'
Posted by Damian Flanagan at 18:36 4 comments: