I am going to be giving a talk 'Who Killed Yukio Mishima?' at the University of Manchester (University Place 6.208) on 8 December 4pm. The event is absolutely open to all so why not come along and hear about Mishima's extraordinary life and spectacular death? I'll be speaking for an hour after which there will be a Q and A followed by book signings and drinks etc.

For those of you in the East Anglia area, I will also be speaking at the University of Cambridge on Monday 26 January at 5pm in the Faculty of Asian and Middle Eastern Studies. Hope to see some of you there. 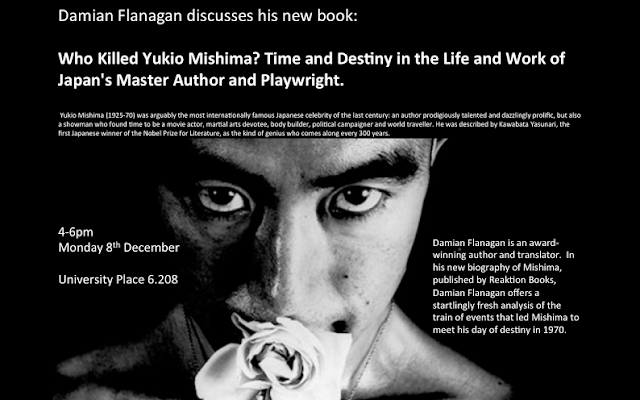 Posted by Damian Flanagan at 04:08 No comments:

It's been an interesting week...I picked up a virus on the flight back to the UK from Spain and by Saturday I was bedridden. On Tuesday eve I was due to give a talk at my own book launch in London - surely I'd get better in time? Instead with every passing day I felt yet more exhausted. Finally on Tuesday morning I strapped my dead body onto a horse and proceeded El Cid-like towards London. Just so long as they didn't realize I had already died until the battle was over!

Yukio Mishima was pursuing me everywhere. With a few hours to spare and feeling slightly revived after getting off the train, I thought I might look round the Ming exhibition at the British Museum. Exhibitions are not the best if you are feeling weak so I soon plumped for sitting on a bench and listening to the dulcet tones of Michael Wood guide me while I looked at the audioguide's digital images. The exhibition is partly divided into 'bu' (military) and 'bun' (cultural) pieces exemplifying the age-old maxim that enlightened rulers had to be both warriors and cultured men, a theme picked up by Mishima in his pursuit of 'bunbu ryodo' (the path of both the pen and sword): that he would be both writer and warrior. 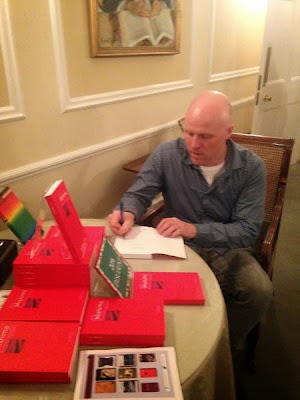 And so to the event at the Daiwa Foundation...it passed off well I think. Not having had time to script anything I spoke off the cuff for what was supposed to be 30 minutes but somehow ended up being 1 hour 10 mins. My main theme was Mishima's obsession with time, time-keeping and time symbols (by a nice irony, my mother and sister arrived 10 minutes late - time keeping has never been as scrupulously observed in the Flanagan household as in Mishima's). In the Q and A afterwards, the first question I was asked was the one question I hoped noone would ask: what happened to the silver watch Mishima was given as an award by the emperor in 1944? I really must find out the answer to this (which may be a very simple answer) before I give my next talk at the University of Manchester on December 8!

It was great to see old uni muckers like UBS master-of-the-universe David Soanes (who looks exactly the same as he did 25 years ago) and to meet Wiesia Cook Bownas, the widow of Geoffrey Bownas, a Japanese literature scholar who had collaborated with Mishima. Many thanks to one and all for coming and to the superb staff at the Daiwa Foundation for hosting the event. Afterwards I enjoyed a wonderfully entertaining dinner with Jason James, the effortlessly charming director of the Foundation. Having been unnerved to see my hand weirdly shaking as I attempted to sign copies of the book, I found I considerably revived after a couple of glasses of wine and enjoyed startling my dinner companion with the news that I hadn't actually eaten anything since yesterday lunchtime. 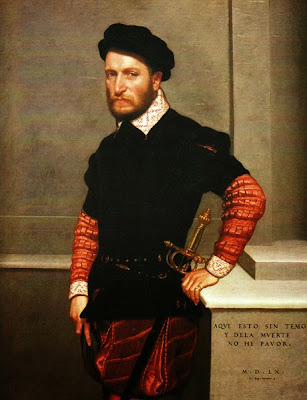 The following day I took in the exhibition at the Royal Academy of the works of the great, but largely forgotten Italian Cinquecento painter, Giovanni Battista Moroni, a master of realistic portraiture. I was particularly taken by this picture of a cocksure Spanish noble (Gabriel de la Cuela, later governor of Milan) with the inscription by its side: Aqui esto sin temor y dela muerte no he pavor (Here is a man without fear who does not flinch at death). Is it just me or is there something intensely Mishima-esque about this fellow as well?

Good luck to them. As for me, I'm just hoping to make a full recovery soon...

Posted by Damian Flanagan at 17:49 No comments:

What Happens in Barcelona

Tomorrow (November 9) is D Day in Catalonia, when the region goes to the polls in a supposedly illegal vote on independence denounced by the central government in Madrid. I'm really fascinated by the link between personal psychology and political beliefs (of which much more in some later blogs), but today just wanted to muse on some aspects of my own psychology.

A few days ago I happened to be in Barcelona (Image of Placa Reial above, courtesy of Josep Renalias): it was my third time...or was it my fourth? That's where the trouble began. No matter how much I thought about it I couldn't quite work it out. I know for example that I was definitely in Barcelona as a teenager on my first big solo trip around Europe in July 1987. I can remember clearly the room in the centre of town with plantation shutters and street-side balcony I paid 600 pesetas (£3) a night to stay in. I can remember a couple of Japanese guys I met at the Sangrada Familia who wrote the characters 'Hissho' ('We Must Write to Each Other!'), which I still have somewhere, though I never did write to them. (Someone suggested I could look them up on Facebook with a 'I know it's been a while but...')

And then I'm very clear I was back again in March 1998, when I was visiting a friend and when I stayed at the wonderful Hotel Jardi in the middle of the Bari Goti and opened my windows to allow spring-like warmth to flood my being as I marvelled at the heavenly, tranquil square below. I also enjoyed one of the best St. Patrick's Nights ever in the multitudinous Irish pubs of Barcelona.

But then things start getting increasingly murky. For example I'm sure I've been to the nearby town of Tarragona, but can't place it on either of these trips, which leaves me wondering whether I made a third trip. To forget about a single day is one thing, but to mentally lose an entire trip seems like carelessness... Perhaps though I've actually never been to Tarragona at all and am just dreaming that I have...I'm increasingly coming to the point where I have to recognize that my memories and my dreams are becoming fused and ever more difficult to disentangle.

And then, even more worryingly, there's the Olympics. If there's one thing I was very clear on it was that I was first in Barcelona the year before they held the Olympics in 1988. (I had hardly even heard of this sleepy town called Barcelona at the time and then, a year later, bang, it was suddenly the coolest city in the world.) I have a very quirky habit of often travelling to places with guide books that are nearly 25 years out of date (I once acquired a set of travel guides in a competition and, Scrooge-like, am forever trying to squeeze drops of use out of them). So there I am in Barcelona with my 'Fodors Spain 1991' and I marvel that on the front cover it offers a 'preview to the Olympics'. Preview?! How could it be a preview? The Olympics happened there 3 years before...I briefly considered that they might have happened in 1992 but that of course was the year they were in Seoul - I remember that because I was travelling in Japan at the time. Just to be sure, I googled and discovered that the Barcelona Olympics were indeed in 1992 and that my memories were simply all over the place... 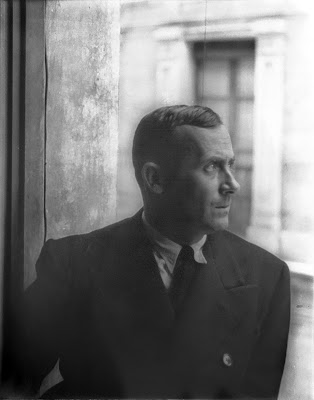 You might conclude from this and the fact that I keep going back to Barcelona, that I really love the place. What's not to love? The former home of Picasso, Miro (pictured left) and Gaudi; the last redoubt of noble Republicans and Anarchists; the best football in the world; the beach. Yet, whisper it quietly, I've always been very indifferent to Barcelona. The Picasso Museum? Once was enough. Sangrada Familia? Not still building that, surely? The Miro Museum - yes, well I would go back to the Miro Museum because I really like Miro, if I could find time to go up Montjuic...I feel guilty for admitting it, but I'm actually much more interested in Madrid than Barcelona. My idea of pure, self-indulgent heaven would be to sneak off for a week and spend every day commuting like a banker to the Prado to commune with Velasquez, Goya and El Greco before passing blissful evenings in Madrid's busy squares.

Alarmingly, this places me on the wrong side of Spain's interminable psychological civil war, on the side of the government and the establishment, on the side of the former fascistas, on order at all costs. Spiritually, I feel I should be in the trenches with Barcelona and the Republicans, copy of Orwell in my knapsack.

Finding then that my memories of Barcelona were in such tumult and disarray, that the Anarchists had completely taken over, I finally decided it was pointless trying to impose any order upon them and ordered my fascist columns to retreat. It was time to yield at last to Barcelona. What had happened to me over the years in Barcelona? Only Barcelona knew.

As for the Catalans and their independence debate, well of course I hope they will have some chance to decide for themselves. Though I don't think that anyone would see Catalonia as more or less of a nation if they assumed all the paraphernalia of a state. To me, first and foremost, Catalonia is a state of mind. It's not so much that Madrid is better or worse than its great Catalan rival, the truly wonderful thing is that they are so different and play off against each other so inspirationally. While logic, vigorous process and analysis have their place so too has the mental creativity engendered by the fusion of fact, surrealism and fantasy. When you put them all together, whether in the space of a single head, or in an ongoing national schism, you end up with something like the creative tension of an El Clasico.

Posted by Damian Flanagan at 16:17 No comments: