(Ahead of the anniversary of the “Mishima Incident” on November 25, here is a reproduction of an article I wrote three years ago, which is no longer available online). 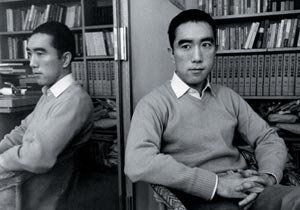 What do you think of when you hear the name "Yukio Mishima"?

A dazzlingly prolific writer with more than 30 novels, 70 plays and umpteen volumes of short stories, essays and memoirs to his credit? A movie actor, martial arts enthusiast, body builder, political campaigner and world traveler? Or perhaps the man described by Yasunari Kawabata, winner of Japan’s first Nobel Prize for Literature in 1968, as the kind of genius who comes along once every 300 years? 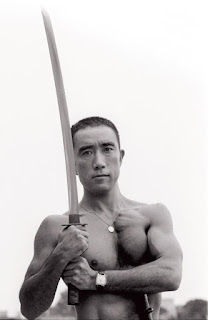 Chances are, though, your associations will be somewhat different. Probably you will recall a man who died on Nov. 25, 1970, by an act of "seppuku" (excruciating ritual suicide) after the failure of a bizarre coup attempt known as the "Mishima Incident."

How to make sense of a man of so many different aspects, a literary man of such finesse and sensibility capable of actions of such extreme violence?

In the many thousands of pages of analysis that have been afforded to Mishima's death, inevitably the one object that commands the most attention is his 17th-century sword. Yet when I set about writing my biography of Mishima, I wished to demonstrate that the most telling object in his life is actually one that has passed unnoticed: Mishima’s watch.

Mishima’s interest in watches and clocks, and timekeeping in general, was a lifelong obsession. In the late 1960s, Mishima spoke of how he would loiter in front of shops on the Ginza displaying expensive watches and salivate at the thought of them.

SILVER WATCH AWARDED BY THE EMPEROR

Crucially, in 1944, when Mishima, as a youth of 19 had been nominated top of his class at the elite Peers School in Tokyo, he had been taken to the Imperial Palace and in a formal ceremony awarded a silver watch by the emperor himself. From that day on, almost as if he had received an imperial decree, Mishima always adhered to the most precise keeping track of time and was utterly unforgiving in any lapses in observance of time by others. 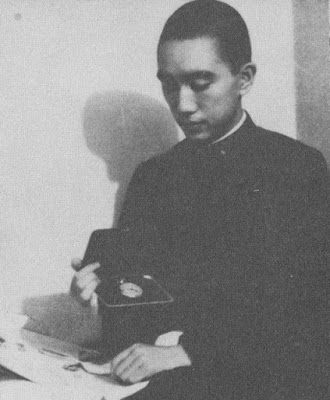 Despite being an enormously prolific writer, Mishima was famous for never having missed a deadline. No party was so entertaining that Mishima would not leave it in order to be back at his desk at midnight so that, as was his regular routine, he could continue writing until dawn. If you had a dinner date with Mishima and you were more than 15 minutes late, Yukio would be gone, having ordered dinner for you and left a sarcastic note in his wake.

Why was Mishima so obsessed with being on time? Partly it was the keenest manifestation of his general fastidiousness, but it also stemmed from the difficulties of his adolescence when, faced with a hostile father who violently opposed his knack for writing, Mishima had to secretly compose his manuscripts throughout the night while his father slept. Precise time management was the only means by which Mishima could keep his dream of becoming a writer alive.

The symbol of this obsessive devotion to strict time management was the watch. In his memoir about his sexual relationship with Mishima, the gay writer and teacher Jiro Fukushima describes the first time they went to a hotel room together in 1951. The next morning Mishima could not find his watch and - in the manner of Bruce Willis’ character in "Pulp Fiction" - turned over the entire room in search of it.

Mishima's scrupulousness regarding the observance of time was the foundation for all his musings about the nature of time itself. Having been born in 1925 and spending the first 20 years of his life in an oppressively nationalist and militaristic country, Mishima suddenly found himself spending the next 20 years in a largely Westernized state, committed to peace and relentless economic growth.

The politics of Mishima’s final five years, from the age of 40 onwards, were a conscious attempt to try to find resolution between this temporal disjunction, which ran like a seam through the center of his life.

Mishima’s wrestling with the concept of time was at the heart of many of his literary works. In his major novel, "Kyoko’s House" (1959), for example, Mishima pronounced that his ambition was nothing less than to "define an age" and in subsequent novels such as "The Sailor Who Fell from Grace with The Sea," the sea appears as a symbol of transcendence beyond historical time.

In his final novelistic tetralogy, "The Sea of Fertility," his self-proclaimed "life work," Mishima consciously thought about what device he could use to produce a great novel unlike anything that had been written before. Mishima desired to supersede historical time and found the answer in the Buddhist notion of reincarnation.

And so we come to the day of the "Incident" itself. That morning, Mishima had arranged for the last part of "The Sea of Fertility" to be handed to his editor. Mishima had been planning the precise unfolding of the day for months, had rehearsed minute by minute how everything would occur. But it didn’t all go to plan. 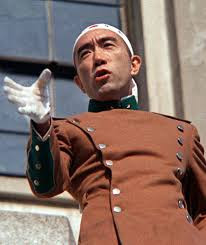 When Mishima appeared on the balcony to make his speech, he could be seen repeatedly checking his watch. In the words he spoke, he referred to how much he had "waited" - and waited and waited. Now he could wait no longer: Mishima was a man who did not like waiting.

Mishima’s final act before plunging the blade into his abdomen was to take off his watch and give it to one of his acolytes. This act, more than any other, was the sign that Mishima was shuffling off his mortal coil.

A career that had begun with the gift of a silver watch from the emperor ended with the divestiture of a watch in the name of an idealized emperor.

In the end, Mishima strangely succeeded in the impossible - in stopping time. When news of the Mishima Incident spread across the nation, everyone stopped, open-mouthed and stared at TV screens. The media frenzy that followed the Incident was unprecedented.

Mishima had managed to transcend earthly time to reach a form of immortality. Looking back now to make sense of that extraordinary life, it is Mishima's intense battle with time, and its dramatic conclusion, which should most command our interest: for Mishima, the true emperor was time itself.
Posted by Damian Flanagan at 16:52

Man, I have never read or known before about Mishima, but the lecture was great and get me going since another texts you wrote. congratulations!! I will dig out into the books o f Mishima and your writting, great stories

Really enjoyed reading it and it held my attention all the way through! Keep it up.