The Art of Blogging

So then, boys and girls, here we go, off to the wild yonder of Blogland together at last...

I shall consider this blog a part of the hallowed wealth of worldwide diaries. Not perhaps quite a diary of a Heian court lady, much less a diary of Samuel Pepys; my aspiration should be more along the lines of Edward Seidenstecker's marvellously under-rated book Genji Diary, his jottings of his life in Japan and America throughout the 1970's when he embarked on the small task of translating The Tale of Genji. It's full of vivid descriptions of everything from Kawabata Yasunari to Watergate, though what sticks in my mind most is nothing to do with Japan at all, but rather his affectionate eulogy to Harry Truman.

Anyway, as one project reaches its maturity, another begins to grow. Last week the new edition of Kokoro appeared and I must say it looks rather splendid. Peter Owen Publishers have done a great job. I started this project of getting Soseki's novels in English translation back into print some six years ago and never imagined it would take quite so long to achieve fruition. The idea was that I would write a book myself about Soseki's life in London and then get his most famous novels republished with proper critical introductions (hardly anything of Japanese literature in English has ever achieved that). Truth to tell it has been a bit of a long slog. Penguin, whom I first approached in 2000, turned me down on the grounds that Japan's most famous writer was too obscure, and various other others referred to Soseki as a 'dead, unknown Japanese writer'. Even Peter Owen Publishers themselves - who first published Soseki's novels in the 1960's - were not too keen initially. But it's all come good in the end. The Tower of London book won a prize and the new editions of The Gate and Kokoro are exactly how I think classics of world literature should be - full of background information and stylish artwork.

Now even Penguin want to get in on the act and are apparently considering putting Soseki into their Modern Classics series and Kodansha are about to publish a book in Japanese about my interest in Soseki. (I must confess to having written this in English and having had it kindly translated by Kodansha as the thought of writing another book in Japanese, like my first one, gave me a slightly sinking feeling.)

One of the best things for me about the whole Series series is that it is a wonderful showcase for the calligraphy of Kosaka Misuzu, my erstwhile calligraphy teacher. Oh, the afternoons that we passed scrawling over ink pot and paper in the KRAC in Kobe as she tried and failed to teach me how to write with a beautiful hand. I was I am sure her worst ever pupil; but it's great to know that the connection has lead to her calligraphy now adorning Soseki's novels in bookshops across the English speaking world. 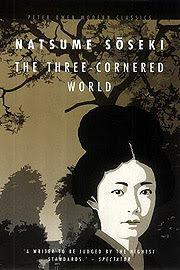 One very sad note however is that last week I discovered that Alan Turney had died. Alan was the translator back in the 1960's of the terrific translation of The Three Cornered World (the only Soseki novel still being published in Britain when I started this project) and of Botchan. It was reading the translations of people like Alan Turney and Jay Rubin that I became interested in Soseki in the first place and I had been in contact with both of them about relaunching their translations. I felt that these translators had never really got the credit they deserved which is perhaps why after translating a couple of Soseki novels, Alan Turney appears to have devoted himself to his pupils in Japan. Anyway, he is gone, but not forgotten, at least in Damian's world...Alan, we salute you.
Posted by Damian Flanagan at 17:32 4 comments:

A momentous day... Damian has finally caught up with Blog technology and will be posting news and comments on this page whenever inspiration strikes.