The True Meaning of Local Democracy 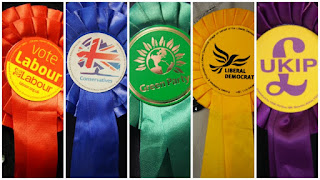 On a broad, leafy avenue linking the popular suburbs of Fallowfield and Chorlton in South Manchester, there is a seemingly infinite array of political party placards - every single one for the same party. Labour, Labour, Labour...

You wouldn’t think that Labour would have to campaign too hard in these parts - they currently hold 95 out of the city’s 96 seats and between 2010 and 2016 held all 96. Yet through the door come multiple Labour leaflets, while in many areas of the city, the Conservatives mount no active campaign at all.

In fact, for many years the Conservatives struggled to find anyone who would stand as candidates in the wards of England’s second city. You would have to be a complete mug, it seems, to even try.

I am one of those mugs...In many parts of England, standing as a Conservative may be the safe, establishment thing to do: not in Manchester, where there has not been a Conservative councillor in over 25 years. Here it feels like you are a reckless and gutsy guerrilla fighter.

I am running in the ward of Didsbury East, on paper at least the type of place where you might imagine the Conservatives would flourish. It has plenty of Edwardian and new-build mansions and is beloved by the chattering classes.

Yet I can’t think I have seen a Conservative placard on display anywhere in Didsbury, or indeed any part of Manchester, in the last 20 years. 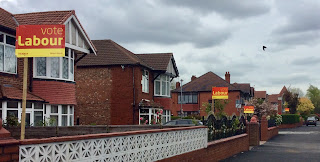 I wonder if any academic studies have been undertaken on what the “tipping point” is that support must fall to before it becomes socially unacceptable to display a placard. Actually, not just socially unacceptable, but positively dangerous - inviting a torrent of doorstop abuse or your car being keyed.

It was going to be interesting trying to root out those “hidden Conservatives”... I announced to my 8-year-old daughter that I was going out campaigning, but she got the world “campaign” mixed up with “champagne” and started telling me how she tried some once but she thought it was fake (it was sparkling apple juice), all of which left me nonplussed. When I asked her if she would like to join me on the campaign trail, she enthusiastically responded, “Are we going to do that champagne thing now?”

I rather like the idea of going “champagning” rather than “campaigning”, though I suspect the connection of the word campaign to champagne might be premature. I personally hand delivered 2500 Conservative leaflets, and was amused by some of the responses. “Haven’t seen any of these in a while”, said one retiree. When I put the leaflet in one letterbox, a furious young man with a beard raced down the street and shouted at me, “Don’t put this **** in my letterbox!” 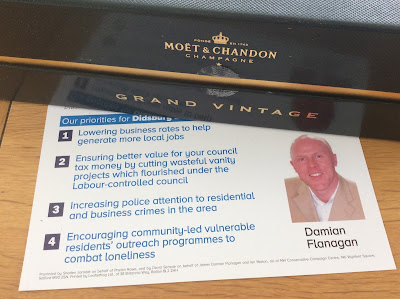 But there were numerous positive responses too. When a dog barked furiously at me as I passed one carefully tended garden, its owner hushed it with, “Be quiet, it’s the Conservatives!” Another lady stopped me on the street and told me how delighted she was that the Conservatives were back campaigning in Didsbury.

When I bumped into a LibDem delivering leaflets on the same street, I jokingly offered to deliver his leaflets for him, while noting there was a bin nearby.

What I take most from this process of walking up to hundreds and hundreds of doorsteps over many hours, so that my feet are quite blistered, is the importance of the democratic process itself. Like many people I tend to get irritated by endless political leaflets coming through the door, and admit I have sometimes in the past transferred them directly to the recycling. And in my campaigning too, some people in Manchester when offered a leaflet, refuse to take it when they see it is from the Conservatives.

Yet I think they are making a mistake, not because I want them to vote Conservative, but because they fail to appreciate how difficult it is these days to get minority parties to mount any kind of campaign in areas they don’t consider “winnable”. Pretty soon, people in Manchester just get used to the idea that Labour will win without their bothering to vote - after all the national turnout in local elections is around 30% - and the only possible alternative is the LibDems.

But this type of thing is a travesty of true democracy. I consider it my mission as I pound, solo, Manchester streets not just encouraging Conservative voters, but offering everyone a true democratic choice. It is appalling that Manchester has slid into being a one-party state - where none of the business of government is scrutinised by any kind of opposition in the Town Hall - and yet noone appears to be remotely bothered about it.

Just to be completely even-handed about these things, I wish to also tell you that it pains me that a few miles south, where family members live in the wealthy area of Bramhall in Cheshire, Labour never mount any campaigns or push any leaflets through the letterbox.

Do people in Manchester seriously think that 95 out of 96 councillors being Labour is a good thing? Or that people in Cheshire have no need to even read what Labour campaign promises might possibly be made to them? Whatever your politics, don’t you think that councils are likely to be better run, more diverse and democratically legitimate with some other parties represented? But no, in a “powerhouse” Northern city all they do is put up placards: Labour, Labour, Labour...

I personally take no glee in seeing different parts of the country dominated by one party or another, and then rather than attempting to make a comeback in areas where they have been rooted out, funnelling all resources into utterly dominating areas they already control.

The worst travesty - of which all parties are guilty - is treating local elections as national elections, concerned only by the end of the night with the grand totals of seats won and lost and what that spells for Westminster. But really, that type of thing is of much lesser importance. What really matters is that every party is fully represented and campaigning and engaging with the public in every local area. That is true local democracy at work.

What we have at the moment is a system that is grotesquely distorted, broken, and profoundly undemocratic.

For me, it will be a triumph not so much if I get elected, but if I have managed to connect with thousands of people in a ward in which they had come to think that there were at best two choices, that the Conservatives simply did not care about them and that it was hardly worth voting. I have put myself forward in order to offer a viable, important third option - whether they choose to take it is far less important than their actually having it.

If just some of the people of Manchester appreciate this revival of the more genteel, less world weary and less polarized politics of yesteryear, then I will truly consider my “campaign” to be worthy of “champagne”. 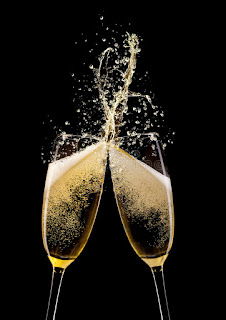