A Tantalising Glimpse into a "Rogue" Soseki 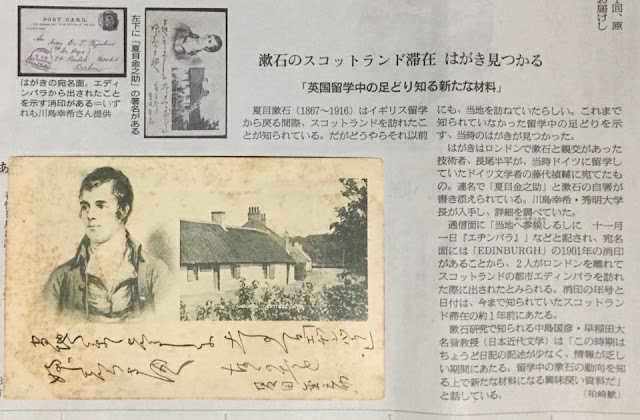 There has been a truly fascinating and important discovery in the world of Natsume Soseki scholarship, one which begins with the tiniest of inscriptions...

According to the April 4 evening edition of the Asahi newspaper a postcard has emerged sent by the Japanese engineer Nagao Hanpei to a Japanese scholar of German literature then living in Berlin called Fujishiro Teisuke. The postcard depicts Robbie Burns and the Burns cottage in Ayr, Scotland and is co-signed by a “Natsume Kinnosuke” (the real name of Natsume Soseki). The card specifically indicates being in Edinburgh on November 1 1901.

Why does any of that matter? It has always been thought that during the two years Soseki spent in the UK between October 1900 and December 1902, apart from a single night spent in Cambridge at the very beginning and a stay of a week or two in Pitlochry, Scotland at the very end, Soseki never left London. But this postcard potentially explodes that idea.

About Soseki’s first year in London we have a pretty detailed knowledge because Soseki kept a diary. But a year in, the diary entries dry up and what he actually got up to becomes mysterious. This is just after the time that Soseki ceased his weekly sessions with his Irish tutor William Craig and became isolated and neurotic, obsessed with writing his “Theory of Literature”.

To adopt the parlance of “Apocalypse Now”, Soseki was about to “go rogue”, famously reputed to have sent his employers at the Ministry of Education in Tokyo a blank sheet of paper as the annual report on his progress. The gossip amongst the Japanese in London meanwhile, telegrammed back to Tokyo, would soon be that Soseki had “gone insane”.

Now suddenly we see Soseki pop up in Scotland and Edinburgh, one year ahead of schedule...

For me this opens up far more interesting possibilities. For example, I’ve always strongly felt that Soseki must have visited Manchester Art Gallery - above all art galleries, including the Tate in London, it is the art works contained there that most powerfully connect to Soseki’s later writings. Yet there is no proof that Soseki ever visited Manchester - indeed, quite the reverse, it has always been firmly believed that, with the above two exceptions, he never left London.

But now we have a glimpse of another “rogue” Soseki, failing to report on his movements, who could potentially have visited many places in the UK we simply do not know about. However if we look at the pattern of Soseki’s earlier and later life, then we can see that an impulse to travel, particularly as a form of alleviating stress, is a consistent feature.

The secret life of Soseki’s dark year in the UK, when he went metaphorically “up river”, is a mystery that still throws up tantalising clues and glimpses into the enduring enigma of Soseki.
Posted by Damian Flanagan at 15:51 No comments: