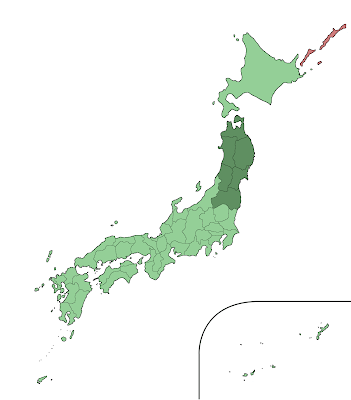 As is the way of these things, the world media circus seems to have now moved on from Japan despite the fact that the aftershocks, the accumulation of radiation, and the humanitarian relief issues remain. Perhaps time then to take stock of a few aspects of the now one-month-old disaster.

The first thing I wish to say is that my heart sears at the thought of it being the Tohoku (North-East) of all regions that had to suffer this.

I have travelled to every one of Japan's 47 prefectures, but I love the area of Tohoku more than any other. The first time I went to Japan, when I was 19, I had 11 weeks to explore the country and spent the first few weeks dashing about with a Japan Rail Pass in hand on trains from Tokyo to Kyoto and from Niigata to Sapporo. But somehow, there seemed something superficial about this trek from one urban centre to another. From the train windows I gazed hypnotically for hours at the rural landscapes outside. It occurred to me that this was was where Japan's greatest secrets were to be found and that I could never reach them while dashing through the country on Bullet Trains.

So, somewhere outside Morioka, right in the centre of the Tohoku region, I decided to get off the train and just start walking. I resolved that all I would do now for the next two months was walk and walk and walk. For friends who know me now as someone who, in Woody Allen-fashion, views the countryside as somewhere desirable to make a day trip but no more, they might be surprised to learn that in my 19th year, I spent an entire summer rambling the wilds of Tohoku, climbing all the highest peaks, exploring remote peninsulas, circumnavigating volcanic lakes. I stayed at the cheapest hostels and ryokan, lived off a diet of rice and raisin bread, lost an enormous amount of weight. My sole companions were books such as Shusaku Endo's Silence, histories of Japan and teach-yourself Kanji books.

There is nowhere quite like Tohoku. In subsequent years I hitchhiked around Shikoku, went on driving tours around Kyushu, travelled to remote islands in the Japan Sea, flew to Okinawa. But nowhere quite matched that first summer. Once, I had spent two days walking down the 'axe-head' of the Shimokita Peninsula at the very northern reach of Tohoku. It was stupendously beautiful and remote. I hardly met a soul on my two days on the road, singing loudly as I walked. My resting place was a little village in a cove, which I came upon late at night in search of the only minshuku (family home cum lodging house) in town. In those days it seemed as though you could always take chances on these kinds of things and something would turn up.

Tohoku was always a place that represented 'the other': a paradoxical place of adventure and yet safety, a place of turning-in-on-oneself and spiritual retreat. It was ever so. In the seventeenth century when Basho set out on his Narrow Road to the Deep North, he was of course Tohoku bound. In the twelfth century, it was Tohoku to which the legendary figures Yoshitsune and Benkei fled from strife in war-torn Kyoto. The narrow road north seemed to lead to the very heart of Japan itself. When, in the Second World War, it was feared that the library of Natsume Soseki, preserved in Tokyo, would be destroyed by air raids, his disciple Komiya Toyotaka brought the books to Sendai for safekeeping.

Tohoku was Japan's inner sanctum. And the reasons for this were steeped in both history and geography. Not only is Tohoku most rugged region, but it is also the area where the original occupants of Japan were gradually pushed back by continental invaders in the first millennium. There are pockets of Tohoku where shamanistic rituals survive and where Buddhism is still a foreign, imported faith. If you dig deep enough in Japan, Tohoku is what you come to.

We all have places of the mind that are our spiritual retreats. Sometimes we might seldom visit them, but nevertheless that does not dim their importance. Their significance is not so much as a physical, day-to-day locale, but rather as a symbolic place of mental retreat and homecoming, somewhere that we are all intending to come back to, somewhere where our ashes might be scattered.

For me, such a place is Tohoku, though it has been many years now since my foot has trod its turf. For the last twenty years I have always been dreaming of having just one summer like that of my 19th year in Tohoku, of walking the road again with nothing but a shoulder bag and map, of re-climbing those mountains, of walking once more those coastlines. Always though, there were too many work pressures, deadlines to meet, and young children to look after.

It is perhaps absurd to say so in the face of such tangible human misery, but the devastation in Tohoku affects me in a way slightly different to all the media hype. I feel as though the place of my most cherished memories, my mental retreat has come under attack.

Tohoku is assuredly part of Japan and a part of the Japanese economy. But it is also part of the world, with resonances across the globe not immediately apparent from any simple categorization. Selfishly, I will always believe it to be my Tohoku and it is for this reason, and a thousand others, that I wish it a speedy recovery.
Posted by Damian Flanagan at 22:48 No comments: