The Restaurant of Love Regained 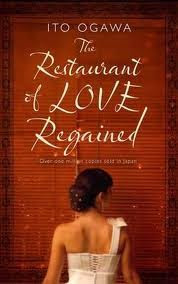 You can hear me discussing The Restaurant of Love Regained and other literary matters on today's Open Book on BBC Radio 4.

The Restaurant of Love Regained is a debut novel by 37-year-old Ito Ogawa that was published three years ago in Japan and is just being released this month in English in a translation by David Karashima. The book has sold over 800,000 copies in Japan so it will be interesting to see how it fares over here.

It's the story of a 25-year-old girl who comes back to her city flat one day and discovers that her Indian boyfriend has disappeared, taking with him all the couple's possessions. Her dream of their having their own restaurant one day is in tatters and, distraught and penniless, she heads back to her home village in the countryside that she ran away from ten years earlier. There, traumatized and unable to speak, she makes an uneasy peace with her estranged mother and decides to set up her own makeshift restaurant, preparing wholesome home-made food to order for just one person or group at a time.

It's an account of someone who has lost everything starting over again and getting back to basics - rediscovering the wonder of nature and the home town she had left behind. Through the craft of cookery and the intimacy of serving food, the heroine begins building and re-building a host of new and old relationships. Her restaurant provides emotional therapy not just for herself, but to everyone in the village - from a stray rabbit to a lonely spinster - and ultimately is the means of reconciliation between mother and daughter.

The central idea is how love and affection can be transmitted through food and how joyous it is to make people happy through serving people dishes oozing in natural flavours. It's a rejection of some of the evils of modern life - the breakdown of families, the fast food culture, the obsession with profit and en masse uniformity - and a return to the provincial, the family, local flavours and simple pleasures.

The author Ito Ogawa (pictured right) is a lady of many talents. 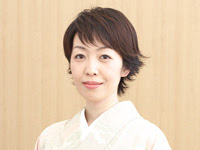 As well as writing adult fiction, she has written books for children and is also a member of a musical group Fairlife for whom she writes lyrics.

The book is not something I would have usually read: I devoured it while simultaneously scrutinizing Mishima's Sea of Fertility tetralogy and its lightness of touch and easy readability could not have been in greater contrast to the dense prose and heavy philosophizing of Mishima. I did however find a lot of interest in it and both watched the film of the book and listened to the Fairlife musical album associated with it.

There's no doubt that the novel has struck a chord with Japanese female readers in particular, who can readily empathize with a central character for whom life had not gone as she would have wished. On one level, the book connects to recent bestselling fiction in the West such as Joanne Harris' Chocolat and Elizabeth Gilbert's Eat, Pray, Love in the common theme of rediscovering oneself and finding love through food. However the book is also very much a part of the strong tradition of popular Japanese female writing by authors such as Banana Yoshimoto and Amy Yamada.

The book is indeed a symbol of the power of Japan's female readership. A few years ago, the bestselling book in Japan was called The Dignity of the State and was a very nationalistic male polemic, warning against the dangers of Westernization and calling for a return to samurai values. But the following year this was trumped by a book called The Dignity of a Woman, which sold 3 million copies, and appealed to the huge female reader market. The appeal of that book was to offer advice on how a Japanese woman should conduct herself in the modern age and suggested a fairly traditional agenda of conducting oneself with decorum.

The Restaurant of Love Regained also falls into this category of post-feminist Japanese writing. It is feminist to the extent that the heroine has the independence to fend for herself and set up her own restaurant; but it is also traditional in its appeal to time-honoured Japanese values - and a woman's place is still in the kitchen! The heroine actively rejects the apparently sexually liberated lifestyle of her mother and feels kinship instead with her grandmother - indeed she goes through life with her talisman of a rice bran miso pot passed down from her grandmother. 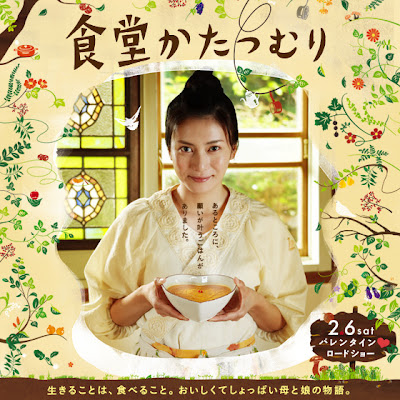 The appeal of the book is instant and universal - we all dream of having time to cook - but I also read this novel as an interesting metaphor for modern Japan itself. On the surface everything seems cosmopolitan and international: the heroine has been living with an Indian guy and worked in a Turkish restaurant and picked up recipes for Iranian pomegranate curry. But then she takes all this experience back, along with her grandma's traditional miso pot, to a profoundly Japanese setting - her little restaurant in the countryside and starts making international cuisine there. So it is very typical of the Japanese way of managing to absorb influences from around the world and yet, by keeping its core values, transforms them into something distinctively Japanese. The world is enfolded into Japan and is then seen through the microscopic. In the dishes concocted in a provincial Japanese restaurant, we can taste Indian aromas, dreams of Turkish mosques and fantasize about Iranian plains.

The one additional thing I might say is in relation to the heroine's rather 'hands-on' (and occasionally excruciating) manner of sourcing and preparing meat, which manages to be distinctively Japanese in its ability to be delicate, aesthetic and brutal all at the same time. There is something quintessentially Shinto-Buddhist in the perception even of meat preparation as a sacred rite, representing the transfer of nourishing life force.

There is also an accomplished children's fable enfolded into this novel - the story of the owl who hoots twelve times at exactly midnight every night and is the unchanging, comforting guardian of the heroine is a clever metaphor for the hidden wisdom of a parent looking out for a child (albeit in an occasionally irritating way) - and is really a children's story threaded into the text of this simple, but often quite profound book.
Posted by Damian Flanagan at 11:03 No comments: