Visions of The Gate 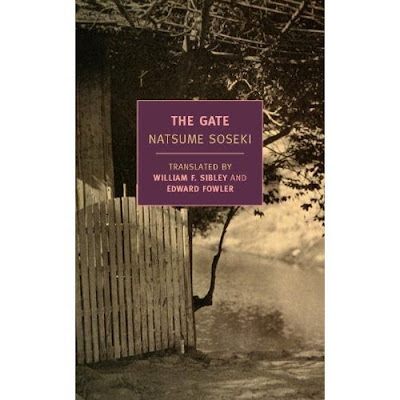 I have been intrigued to note that a new translation of Soseki's The Gate is being released by The New York Review of Books in December this year. The Gate is one of those supreme masterpieces of twentieth century literature, a work of such profound subtletly that while being casually dismissed by many an empty vessel ('A Huge Disappointment!' writes one such on Amazon America), it nevertheless remains not only the ultimate connoiseur's choice, but also its author's own personal favourite. The translators of this new edition are denoted as 'William F. Sibley and Edward Fowler'. 'Who they?', I wondered, imagining that they must be a couple of preppy Harvard graduates holding each other's hands on their first book together. Perhaps they were the irritatingly talented faces of the nouvelle vague who I might be hearing a lot more from in years to come.

As it turns out however, the back-story is considerably more interesting. When I googled 'William F. Sibley', I discovered that far from being a young graduate he was in fact an eminent academic at the University of Chicago. And far from hearing more from him, I was startled to realise he was already dead, having passed away in 2009 at the age of 67. Very distantly, a few bells start to ring. I dimly remembered being told a few years back in some emails exchanged with Marvin Marcus (author of a recent book on Soseki) that a 'Bill Sibley' at the University of Chicago was working on a translation of Soseki's first 'trilogy' of novels. Whether he actually got anywhere with Sanshiro and And Then, I don't know, but presumably publishing these first two would be a bit tricky as a rejigged version of Jay Rubin's translation of Sanshiro has been released in the last few years by Penguin (see my blog 'The March of the Penguin') while the previous translator of And Then, Norma Field, was also a colleague of Sibley's at the University of Chicago.

Reading about Sibley and Fowler in the Memorial Symposium address at Chicago delivered by Sibley's erstwhile pupil Fowler (now a senior academic himself in California) made me warm to them both. Sibley sounded like something of a free spirit, a man who while being perfectionist in his pursuit of Japanese letters, never lost sight of the bigger picture, wanting in the early days to blow off academia altogether and just go travelling. He made room in his life for Italian cuisine, Mahler and rock music, and always referred to his big thesis on the Japanese author Shiga Naoya (later published as The Shiga Hero) as 'the fucking ronbun' (ronbun meaning 'essay'). He sounded like the type of guy that could entertain you royally if you went out for a few beers with him in downtown Chicago or Tokyo.

That an intelligent, colourful maverick like this should be drawn towards a work of extreme understatement like The Gate might seem superficially strange, but is in fact entirely apposite. My regret though is that it seems this edition will ultimately lack any introduction from Sibley. When a man like this has been obsessed with a book and a writer for decades, what a pity that they have never actually managed to put into words what it is about the book that so absorbs their interest. Reading Edward Fowler's address, I saw that Sibley had also previously translated a chapter by the Japanese critic Maeda Ai on The Gate and Fowler himself recycles a lot of ideas by the critic Kumakura Chiyuki to explain why the novel is profound. Yet to my mind none of this really gets to the heart of the matter. Analysing Tokyo's Meiji period topography or discussing the way in which Chinese characters segue from one word to another in The Gate are all mildly interesting, but it is not the reason why the novel gripped Sibley and refused to let go. The real reason is because in the 'nothing narrative' of The Gate, Soseki smashes an axe through the surface calm of human consciousness to create a novel of profound unease. There is an entire universe of ideas on the fundamental nature of existence that instantly connects to people around the world, whether in Chicago, Manchester or Manchuria.

Alas, now I suppose we will never know how the book spoke to Sibley. Instead it seems the publishers are drafting in a third person, Pico Iyer, to pen an introduction. Iyer is apparently a prolific travel writer (though I confess is unknown to me) and I suppose if he helps bring a wider audience to The Gate, then all well and good, though I must admit jaded cynicism when it come to publishers' usually lame attempts to parachute in 'celebrity endorsements' for such books.

Briefly immersing myself in the world of Japanese Literature academics in America elicited a couple of contradictory emotions. On the one hand, I thought how great it would be if every day you could hang out with people of similiar interests, where everybody in the field knows each other like members of the local village. There's a lot of back-slapping and bonhomie and references to Ed Seidenstecker and Donald Keene. In contrast, over here in my backwater of England, things paradoxically seem like the Wild West, where books get written on the hoof, in stony solitude, where you scramble to pursue your interests in a sea of utter indifference.

But then there's the other side of the coin. I also can't help thinking that this whole world of well-heeled academia is a trap, that locks minds within the narrow parameters of often perversely defined disciplines. By constantly focussing on the word 'Japan', for example, academics become mouthpieces and lackeys for Japanese critics (themselves often highly parochial in their vision) instead of opening their minds to larger, more universal possibilities. In the end someone outside the field has to be dropped in to explain everything to a wider readership in the West.

In the ultimate irony, with a depressing lack of vision or orginality, the University of Chicago has inauguarated an annual 'Sibley Translation Prize' despite there already being a similar prize run by New York's Columbia University (Chicago's prize is for works up to 15,000 words; New York's for books). Wouldn't it have been a lot more fruitful and innovative if the University of Chicago offered the prize instead for an original critical essay, to reward someone for thinking for him or herself, for being able to do what Sibley himself tragically never could - to explain what it is about a literary work that speaks not just to a closetted discipline but to the larger world?

I rather suspect too that on some level or other Sibley was probably of the same opinion - wishing to drop out of his university position, blow off his academic 'ronbun', hit the road, go travelling and mull the deep, deep reasons why a novel like The Gate kept swirling and swirling round his mind. You can read the full text of Fowler's address here.
Posted by Damian Flanagan at 11:59 1 comment: