On Monday morning I took a call from the London Evening Standard asking me if I would like to pen a few words in reaction to the devastating earthquake and catastrophic tsunami. Beyond the obvious misery of human loss and the usual palaver about 'economic impact', my thoughts turned to how this terrible event will shape the future psyche of the Japanese nation:

There is of course a lot more to be said on this subject and tonight I expanded on it a little in an interview on the BBC's World News Today.

Longer musings on the disaster will follow shortly, but for the moment my heartfelt condolences to all those affected by the tragedy. My own memories of being caught in the devastation of Kobe in 1995 have been brought all too vividly back to mind.
Posted by Damian Flanagan at 20:24 1 comment: 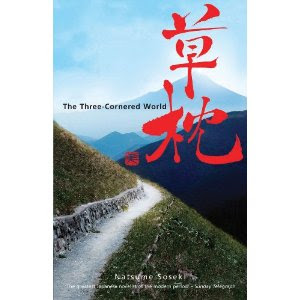 Yesterday in the post arrived a couple of copies of the new edition of The Three Cornered World and very pretty it looks too. It's the fourth book from Peter Owen (apart from my own on Soseki in London) for which I've contributed a chunky introduction, and this one has the added bonus of an afterword by me analysing all the calligraphy for the entire series. (Is my analysis getting too Freudian? I describe the frontispiece calligraphy for Kokoro as 'surging spermatozoa (that) tail back into a receiving 'feminine' character'. Yikes, hope I'm not the only one seeing testosterone there.)

It really is a great honour to introduce a masterpiece like The Three Cornered World (TCW) to a new generation of readers. It's not just one of the great Japanese books, it's one of the supreme masterpieces of the twentieth century. And good to know I'm in good company thinking that. One of the most fascinating aspects of the story of TCW is the way it was beloved by Glenn Gould (1932-82), that fascinating, maverick, musical genius.

Gould came across TCW quite by accident. He never visited Japan; indeed due to his dislike of flying, after his retirement from concert playing in his early thirties, he never left North America. In 1967 he was taking a vacation in Nova Scotia from his home in Toronto, when he was approached in the club car of the train by a professor of chemistry called William Foley, a great admirer of Gould's work. The two men fell into conversation and it seems that Foley mentioned to Gould (pictured left) a 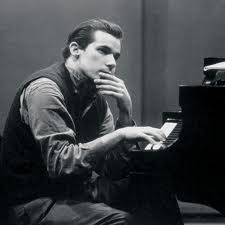 wonderful book he had just read called The Three Cornered World. When the time came to part, the world's most famous pianist presented Foley with his recording of Beethoven's Emperor concerto. Foley later returned the favour by sending Gould a copy of TCW. (There's a very nice equivalence here between a Beethoven musical masterpiece being exchanged for a Soseki literary masterpiece, a kind of Parnassian Swap Shop.)

It is pretty much impossible to overestimate the impact the book had on Gould. (Indeed two books by the Japanese critic Yokota Shoichiro are devoted purely to the subject of Gould and TCW). Not only did TCW become Gould's all-time favourite book, but he was obsessed with it for the last fifteen years of his life. As well as buying all Soseki's other books in translation, he ended up owning four copies of TCW (including, incredibly, two in Japanese); he read out the entire novel over the phone to his closest friend Jessie Greいg; he recorded a slightly condensed version of the first chapter for a nationwide Canadian radio show; and he compiled 37 pages of his own notes on the book. He was it seems preparing to write his own adaptation of the novel for a radio play that was to be called Shioda's Daughter before a cruel stroke brought his life to a premature end. Famously, when he died there were only two books at his bedside: The Bible and The Three Cornered World.

You can, amongst many other intriguing subjects related to this amazing novel, read more about the extraordinary story of this colllision between musical and literary geniuses in the new edition of The Three Cornered World.

A quick note too about Alan Turney, the translator of TCW. In one of my very first blogs, back in 2006, I mentioned my sadness about hearing of his death. The whole story of how, back in 1964, Turney, at age 26, only 6 years after starting to learn Japanese, managed to produce this inspired translation of a dauntingly difficult text, is thrilling. I never had the pleasure of meeting Turney, but he was one of those pioneers whose efforts and achievements - and whose subsequent lack of recognition - was something I always felt keenly.

The year before he died, Turney sent me a warm letter having read my book about Soseki in London. The new critical introduction is dedicated to his memory. It's very, very overdue, but I finally think that with this new edition this enduring masterpiece will now start to get the recognition it deserves. Mark my words: The Three Cornered World is about to be born anew.
Posted by Damian Flanagan at 20:48 2 comments: