I've been intrigued over the last week by the debate over copyright law the UK Greens have stumbled into.Their manifesto seemed to imply that they would change copyright law to Publication plus 14 yrs. Coincidentally or not, this is what copyright was defined as under first Copyright Law of 1710, so this seemed a radically anti-capitalist move, turning the clock back to an age before corporations took over.

However after a flurry of Twitter criticism from authors, they revised (clarified?) this to Author Life plus 14 years (a huge difference). For me, the current Author Life plus 70 years (in UK) seems way too long, benefitting 'author estates' which often have only a tangential connection with the author. It's surely crazy that permission/ royalties could be required to reproduce work from up to 150 years ago...The 1842 Copyright Act - Author Life plus 7 years or Publication plus 42 years, whichever longer - was perhaps only slightly in need of extension. So the Greens have raised an interesting point.

Incidentally, as candidates strive to claim votes in the UK's tightly fought election, I was amused to read in a recent obituary in The Times of singer Ronnie Carroll (RIP, a great character): 'He stood as an independent candidate in Hampstead at the 1997 general election promising to deliver 'home rule' for Hampstead...co-founded the Make Politicians History party and stood at the Haltemprice and Howden 2008 by-election...He hoped to enter the record books by becoming the first candidate not to win any votes at all, but was disappointed to discover that 29 people had voted for him.'

It may be difficult to get people to vote for you, but there's always someone out there determined to support you...

Posted by Damian Flanagan at 17:47 No comments:

I recently did a couple of Youtube interviews, discussing various literary matters, in both English and Japanese. Here's the English link below:

And here's the link for the Japanese one:

For any readers of Japanese, there was also an article on my new book on Yukio Mishima in the Mainichi Shinbun:

Racing to a Stationary Position

Anyone with small children will probably be familiar with the sensation of frustration at restriction of free movement mixed in with the delight of precious time spent with the darlings. As someone who used to travel a lot, who greedily attempted to squeeze in 3 week plus trips to South Africa or South America, before the - yawn - regular jaunts back and forward to Japan, parenthood has presented challenges. Watching less encumbered contemporaries jet off around the world over the last few years has, I must confess, evoked mild twinges of jealousy. If only, sob, I could get to go on more solo trips...

This year, I got to indulge my travel bug in spades and discovered, rather to my amazement, that I quickly tired of the longed-for freedom. I eventually found myself wanting to, well, go nowhere at all actually. Just staying home and getting on with things suddenly became my dream.

First of all, there were the places I went to give talks - London, Cambridge, Sheffield, Liverpool, Edinburgh. So great to return to them all and meet so many interesting people while I was there. My thanks to one and all. And then I absolutely decided that I had to squeeze in a four-day ski trip to Austria. I experienced the customary surge of elation as I disembarked the plane in Innsbruck and thrilled to walk round the chambers of the historic Hofburg, before winding my way to my Alpine spa resort. 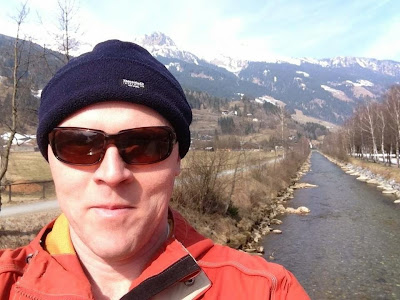 Next day on the ski slopes yielded a strange experience however. Last year I'd gone for just three days and by the middle of day three was sick of it, thinking I'd rather be walking along the valley. This year I was to ski for two days. But after 30 minutes I felt strangely depressed. After an hour I couldn't wait to stop. After two hours I had completely finished and handed back skis and boots, wondering whether I would ever be skiing again...Clearly this was an Ex-ski-ential Crisis.

The next day I decided to go to Salzburg: I last visited as a teenager 26 years ago and not much has changed. Last time I stayed at a hotel backing onto a cemetery which I revisited and came across the grave of Mozart's wife, Constanze. (I never realized before that she outlived Mozart by 51 years and that her second husband spent years writing Mozart's biography.) 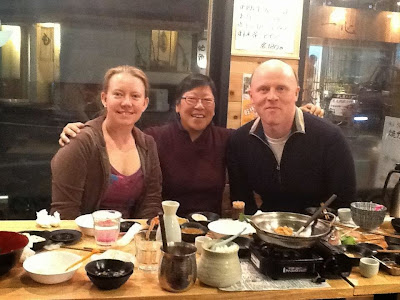 I made a whirlwind visit to Munich and then before I knew it I was back with the family, on the plane to Japan, for the delights of the cherry blossom season. Our sojourn this time round was greatly enhanced by the company of Hong Kong and Toronto-based film-maker Nancy Tong (pictured centre) who visited us in Kansai for a few days. Nancy's latest film 'Trailblazers in Habits' about the Maryknoll Sisters in Hong Kong has just aired on TV there.

Hot on her heels, I was also pleased to welcome to Kansai, visionary diplomat-turned-film-producer Kira Luz, who is hoping to make a feature film about Natsume Soseki. On a night out in Nanba, Osaka, she provided me with unrivalled tuition in Nihon-shu appreciation. (My, what a hangover). Kira is probably the only person in the world who can speak fluent Japanese, Spanish, English and Bulgarian (with a decent smattering of Azerbaijani). I was very pleased to receive a bottle of vintage Bulgarian wine from her and learn that Winston Churchill was such a fan of Bulgarian Melnik wine that he used to order an incredible 500 litres every year.

This year it's been quite wonderful to be out and about so much. But bizarrely, after nearly missing the flight back and watching my son projectile vomit by the toilets on the plane, I found myself hankering just to...not, not go anywhere for a while. There's so much pleasure, you know, in not going anywhere...well, at least until I go to Germany at the end of May.


Posted by Damian Flanagan at 16:10 No comments: