Ryotaro Shiba, 'Gone With The Wind' and Ireland 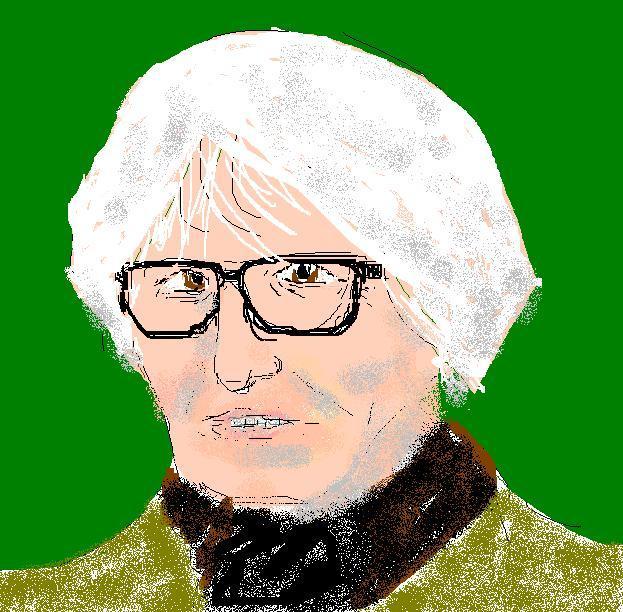 The other week I happened to hear that the novelist Minae Mizumura and her distinguished American translator Julie Carpenter were coming to the UK to attend the Bradford Literary Festival so I invited them over to have a look round a Georgian property I am currently restoring. I recommended to them a classic book called 'Irish Journey' ('Airurando Kiko') by the prolific Japanese historical novelist and travel writer Ryotaro Shiba (1923-96, pictured above).

Shiba is a wildly popular Japanese author whose long historical sagas such as 'Ryoma Sets Out' ('Ryoma ga Yuku') and 'Clouds Above the Hill' ('Oka no Ue no Kumo'; co-translated into English by Julie Carpenter) have sold 21 and 15 million copies respectively. I must confess that I have never read either of these best-selling books, but I am attracted to Shiba's voluminous travel writing - contained in a series called 'On the Road' ('Gaido o Yuku') - which describe both his journeys within Japan and to destinations across the world.

Despite its title, the two volume 'Irish Journey', written in the late 1980s, actually spends much of the first volume in England, as Shiba mills about London and Liverpool, before finally crossing over to Dublin. What Shiba correctly appreciated was that to understand Irish history, you first have to grasp how it stands in counterpoint to English history. Shiba discusses such things as the historical difference between the clannish nature of Celtic society and the centralised power of the English state, making the Irish susceptible to invasion and subjugation, while still retaining their distinctive identity.

One of the great interests of the book is noting the way a Japanese writer observes Britain and Ireland. For example, Shiba picked up on the way that the waiters in London always say 'sir' to him, but the waiters in Dublin never do. Many of his observations are so fresh it's sometimes hard to tell whether they are insightful or absurd. In Liverpool, Shiba speculates whether the city, situated at the basin of the river Mersey, derives its name from 'River Pool' (the Japanese language has only one sound for both 'r' and 'l' so this blurring is more obvious to a Japanese person, but I must admit it's something that never occurred to me before.)

When Shiba finally gets out to the West of Ireland and the Famine Road, he looks down at the sea and ponders why there was such a terrible famine when there were fish in the sea and such delicious seaweed to eat. Perhaps a fatuous observation, but one that highlights the profoundly different culinary heritages of two island nations like Japan (whose cuisine is based around a profusion of fish) and Ireland (where the potato was king and where fish was always considered a poor substitute for rarely eaten meat). And of course back in the 1850s the seaweed wrap had yet to be invented... 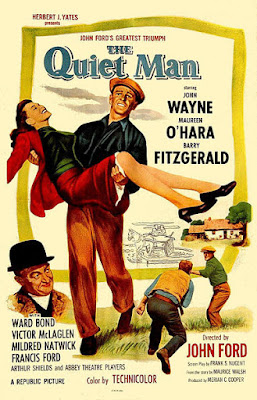 Shiba was particularly interested in the resonances Irish culture had around the world and discusses for example the Irish roots of the great Western director John Ford, who would return to depict his parents' birthplace of Galway in the 1952 film The Quiet Man (poster, pictured left).

It's of course well-known that festering grievances about dispossession of land in Ireland between Irish natives and British settlers would be exported and play out on the much bigger canvases of the new worlds of America and Australia throughout the 19th century. Since the establishment of Anglo-Scots settlement in Ulster in the 17th century, the native Irish had been pushed back to poor quality bog lands of the West of Ireland ('To Hell or Connaught') and from there suffered yet more dispossession and famine and so emigrated in their droves in the 19th century.

The bitterness about land dispossession in Ireland lingered long in the memories of Irish emigrants to the New Worlds of America and Australia. Many of the stories which we today think of as quintessentially American or Australian - such as the sagas of Billy the Kid in the Lincoln County War in the US or Ned Kelly in Victoria, Australia - are at heart the stories of Anglo-Irish rivalries. It might also be noted in passing too, the fact that many dispossessed Scots and Irish suffered brutality in their native lands sometimes led in turn to their meting out brutal treatment to the Aborigines and Afro-American slaves in the lands they moved to.

I'd never quite realised until I read Shiba's book however just how crucial the Irish dimension is to 'Gone With the Wind' (though since the heroine is called Scarlett O'Hara perhaps this should have been obvious).

As a child, I always found the much-lauded film of 'Gone With the Wind' frankly boring. I could muster no sympathy for the fiddle-dee-dee, spoil-brat heroine and had not the slightest interest whether she finally hooked up with Ashley, Rhett Butler or whoever. It seemed to me the American Civil War equivalent of a Jane Austen novel - and I don't mean that as a compliment. 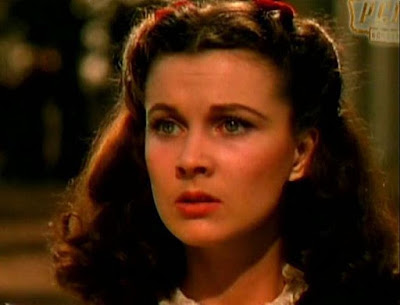 More interesting than the film itself seemed to be the stories surrounding it such as the famous quest by producer David O Selznick to cast the right actress as Scarlett O'Hara (eventually given to relatively unknown English actress Vivien Leigh, pictured above, after just about every Hollywood leading lady from Lana Turner to Paulette Goddard had tried and failed to land the part). Or there was the fuss about the prissy Hayes Code censorship exerted on Rhett Butler's parting line, 'Frankly, dear, I don't give a damn', demanding that the emphasis be bizarrely placed on the word 'give' rather than 'damn'.

Once in my early twenties I made a road trip with my sister from Key West in Florida up to Atlanta, Georgia. As we approached the city I picked up a copy of 'Gone With the Wind' in a store and read the first 50 pages in the car. What has always stayed with me is the extraordinary description of blood-red earth around Atlanta. If you were reading this on your sofa in the UK or California, you might tend to think that this was a trope - that the soil is described as red because of the blood-letting in the Civil War which is about to begin. But what's worth noting is that the soil around Atlanta is literally, strikingly red.

Still, I have to admit that after I left Atlanta, the book mark went in Mitchell's novel and I never returned to it. But after reading Shiba's commentary on 'Gone With the Wind' I began to see the book and the film with entirely new eyes.

The most important line in the film is not the iconic 'frankly, dear, I don't give a damn', but the words of Scarlett's first-generation Irish father to his daughter at the beginning of the film when he teaches her the importance of their land-holdings at their farm at Tara: land is the one thing that truly matters, he says, 'because land is the only thing that lasts'. That blood-red land, even before the Civil War starts, has a blood-soaked heritage harking back to land dispossession in Ireland. In the film, Scarlett's father is depicted as a sort of cod Irishman, a twee leprechaun, but there is true cold steel in those words: we have lost everything before and we are never, ever going to let that happen again. 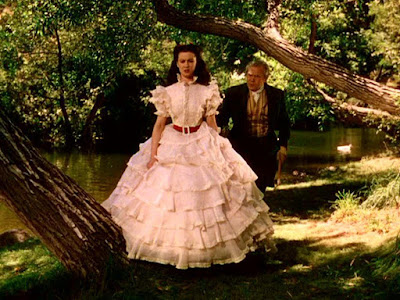 But spoilt American Miss Scarlett does not understand that blood-soaked legacy of the land even though her very name alludes to it: the farm name 'Tara' crucially refers to the ancient site of the Kings of Ireland.

It's only when Scarlett has lost everything - her mother, her husband, her daughter - when the war itself has been lost and Atlanta burnt to the ground, that Scarlett, seemingly without hope, begins to hear her father's words echoing inside her head. Crucially, she still possesses the land and with that, everything is indeed not lost. This final scene of 'Gone With the Wind' can have a trite 'I Will Survive!' feel to it, but it really is communicating something powerful. This is the moment that Scarlett O'Hara actually comprehends who exactly she is, she finds her true inner Irishness and where she came from. What is lauded as a 'great American novel' is also on a more profound level a contemplation of the very nature of Irishness and its enduring effects. 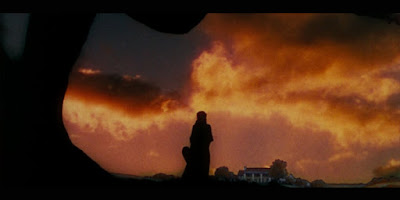 When I heard that Minae Mizumura was also visiting Ireland on her recent trip, I became positively insistent that she read Shiba's 'Irish Journey', and I'm pleased to say she took me up on it. There's a particular phrase that Shiba used to describe the Irish which I have never forgotten. He said that the essence of Irishness was 'Hyakuhai Fumetsu' (百敗不滅), which literally means 'To be defeated a hundred times and yet be indestructible'.

There is surely no work of art which better captures this quality of 'hyakuhai fumetsu' than 'Gone With The Wind'.
Posted by Damian Flanagan at 11:16 No comments: