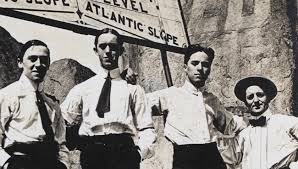 As their boat, the Cairnrona, steamed towards America in 1910 and land mistily appeared, a 21-year-old English music hall star ran towards the railings, took off his hat and exuberantly shouted,

“America, I am coming to conquer you! Every man, woman and child shall have my name on their lips—Charles Spencer Chaplin!”

Closely watching him on deck, and gently mocking him, was his friend and fellow member of the Fred Karno Company - about to excitedly embark on a tour of American theatres - Stan Laurel. For a couple of years afterwards, Laurel - just a year younger than Chaplin - acted as Chaplin’s understudy and shared rooms and ideas with him. (Pictured together at centre of picture above).

By 1913, Chaplin had been recruited by Mack Sennett to start working in the dream factories of Los Angeles, and by 1916 was the most famous man in the world, earning an astonishing salary of $10,000 (equivalent to at least $250,000 today) a week. He had realized his self-prophecy in an incredibly short period of time. Laurel only made a first tentative transition into Hollywood in 1917. Once there, he made repeated attempts to contact his old friend “Chas” Chaplin, who had sent him a signed photo but failed to answer any of his phone calls.

By the 1920s, Chaplin thought himself beyond Vaudeville skits, aspiring to create not simple “comedies”, but major works of art that would blend social commentary, psychological insight, balletic movement, pathos, tragedy and humour. He would write the scripts, perform, direct, produce, write the music and choreograph. There was just one problem. His amusingly quixotic tramp character was superlative at wandering solo into situations of rigidly defined social conventions and creating comic chaos. But to truly transition the character into the realms of great art, he needed to engage a broader range of emotions and give the tramp a central relationship. 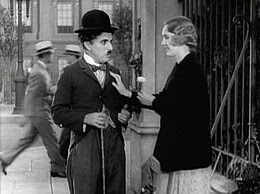 His 1921 feature film, “The Kid”, for example, was a sensation, pairing the solitary tramp with 4-year-old waif, Jackie Coogan. His greatest masterpiece, “City Lights” (1931) paired the tramp with a beautiful blind flower seller (picture right). In “Modern Times” (1936), Charlie and his wife are the representatives of the victims of the Great Depression. Yet for all the efforts made to reach out and connect with our deepest human emotions, it never quite worked. For all his undoubted genius, there was a sense of solitary coldness both about Chaplin and his tramp alter-ego, as if the emotions of the films were contrived, inviting accusations of sentimental mawkishness and artificiality that has always dogged Chaplin’s reputation.

The emotional honesty and charm Chaplin never quite managed would actually be something eventually brought to the screen in the classic Laurel and Hardy films of the 1930s. The new film, “Stan and Ollie”, with a deft script and lauded performances by Steve Coogan and John C Reilly, tells the story of Laurel and Hardy touring Britain in the twilight of their careers in the 1950s.

The film mentions on several occasions Chaplin, and starts the action in 1937 with Laurel’s quest for artistic freedom and some of the financial rewards enjoyed by Chaplin, leading to a rancorous falling out with his producer Hal Roach. Yet it doesn’t quite have space to explore the significance of what Roach referred to Laurel’s “Chaplin Complex”.

It’s impossible to over-estimate the awe with which Laurel watched Chaplin’s star soar and his genius unfold in one masterpiece after another throughout the 1920s and 1930s, or how acutely he felt the sting of the snub offered him by Chaplin - that he, Stan Laurel, was not even worthy enough of a call back. Laurel desperately wanted to effect the kind of artistic achievement, and garner the recognition, that belonged to Chaplin, and it was this impulse which set him obsessively directing, working on ideas, writing and editing through the 1920s and 1930s, while Hardy went off and enjoyed the gold club.

Only in 1936, when Laurel and Hardy were worldwide stars, and Laurel bumped into Chaplin while on their respective boats (Chaplin’s yacht was far grander than Laurel’s modest fishing boat) did Chaplin finally welcome Laurel for a chat, as if the two men could now be back on terms.

Laurel was not however mentioned once in Chaplin’s autobiography - but then Chaplin also failed to mention his second wife, Lita Grey, with whom he had two sons. In all respects, it must have seemed in the final reckoning as if Laurel had lost out to Chaplin. He had far less money and grandeur, had a less diverse body of work, had less artistic control over his work. Yet Laurel and Hardy achieved something which all his life Chaplin had quested for and yet never found - a warm-hearted on-screen relationship that made a true and lasting, empathetic connection with the audience.

If you want to get to the heart of the enduring genius of Laurel and Hardy, it is less to do with their “comedy” (much of their work teeters on the brink of “tragedy”) but rather on the fascinating appeal of their relationship. They are both intriguing, amusing characters in their own right, but brought together they achieve a synergy that is beguiling. It’s how they work off each other, animate, frustrate and endear themselves to each other that is a fascinating dynamic to witness.

Perhaps where Chaplin went wrong was in the relentless, ruthless logic of his thought. Chaplin paired the tramp with people there was some logic to his being, motivated by a sense of assumed parenthood in “The Kid” or sexual attraction to young women in “City Lights” and “Modern Times”. But there was no logic or necessity to the pairing of Laurel and Hardy. If anything it was flagrantly illogical, given their constant mishaps and bickering.

Yet no matter how spectacular the spats or fiascos, there was an underlying, irreducible mutual warmth, a 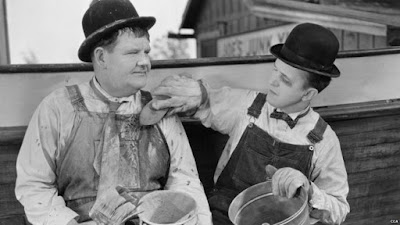 fundamental camraderie that kept them together. The comforting notion that, no matter what happens, the two will never part is what drew audiences towards them and gave their films an emotional, artistic heart that has never dimmed. It’s perhaps for this reason that, as noted at the end of the new film, Laurel refused to appear alongside any other performer after Hardy’s death in 1957, despite continuing to write new material for Laurel and Hardy.

For the brilliant, coldly logical Chaplin, it made eminent sense not to return the calls, or offer any extensions of assistance, to his discarded friend, the still-struggling Stan Laurel in the 1920s. But for the generous, open-hearted Laurel, it made equal, gloriously illogical sense to have his phone number freely available to one and all in the West Los Angeles phone book in the 1960s, personally responding to the letters of everyone who wrote to him and inviting round for a chat and the sharing of comic ideas aspiring talents like Dick Van Dyke and Jerry Lewis who rang him out-of-the-blue for advice.

Both Stan Laurel and Charlie Chaplin wanted to make people laugh, and both of them wanted to touch people emotionally. But Chaplin, the comic “conqueror of the world”, was somehow a bright, remote star, while Laurel and Hardy exuded an immediate, spirit-lifting warmth.
Posted by Damian Flanagan at 15:51 No comments: